I've spent a lot of time since I got my plane earlier in the week planning things out (I probably spent MOST of the week looking for pictures of 109's and looking for paint schemes I want to do).
I grabbed a couple reference pictures of the paint-job I wanted to do, and found an old magazine that I had with a ton of great photos. I think that should be enough for me to figure out the paint scheme. I'm going to have 'fun' figuring out the exact paint colors I'm sure... 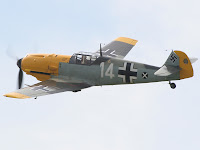 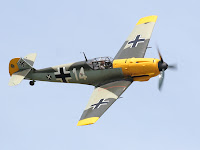 I found a few threads on building GWS foamies that I'm leaning heavily on for instructions:
After reading through a bunch of posts on these threads and looking very carefully at the various pictures, I decided I might as well get started.
Since I want to get this plane close to the real version, I wanted to take out the panel lines that GWS has etched into the model when you buy it new. That means spackling up the lines and lots of sanding.
Since I got the pre-painted version, it was a bit of a pain to sand (the paint kept binding up the 320 grit sandpaper I have), so I ended up doing it wet (running it under the tap while I sanded). I used my finger and a piece of cardboard from an old cereal box to smooth out the lines as I filled them. 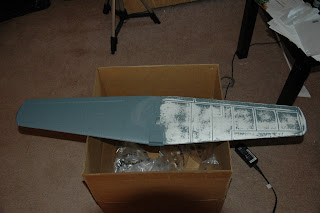 I tested it out on just a portion of the wing first, and you can see in the picture how I ended up sanding most of the paint off when I sanded the spackle. I ended up going through and sanding off the rest of the paint and the fake 'bolts' that are on the wing before I did the rest of the spackling.
I let it sit overnight, and sanded it all down the next morning. I had to do this twice because I had a little trouble getting the spackle to fill the lines and not pull out after I'd done it. Right now I have the top of the wing finished, and am ready to do the bottom. 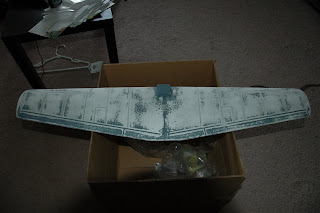