I went on a great paddle today in the new canoe. Second time taking it out, and I absolutely love it.
View Canoe - Watervliet Reservoir River in a larger map
I went to the Watervliet Reservoir, and after driving around for a while looking for a place to put in, I found a nice little trail that led down to a muddy 'beach' under a bridge where I could launch the canoe. It looked like fishermen used the place frequently (in fact a couple showed up just as I was leaving), and there were scrapes on the rocks that looked like a boat had been put in some time in the past (it was blue BTW). After noticing some signs that indicated I should not go on the reservoir, and thinking it over for a bit, I decided to err on the side of caution and head upriver instead of out into the reservoir proper. The river was extremely slow moving, and relatively deep where i started. It sped up a little as I got further upstream, and there were quite a few nice little rocky and sandy shoals that I could have stopped at. There were a few little ponds just off the main river near the starting point, I explored one. I spotted a couple of otters, some herons, and a ton of small fish. There were a few large carp in there too, but mostly down where the river was slower near the reservoir proper. I stopped at one point and had some snacks that I'd brought. I had to get out once or twice to get over some shoals or a tree, but these points were few and far between. I eventually decided it was getting on in the day, and that I should head back. It was actually starting to get kind of dark on the river (it's small enough that the trees block most of the light, and in the late afternoon it could get dark really fast). The rest of the pictures I took are available here.
On the way home I stopped at the mall and picked up a couple of things that I'd wished I'd had on the trip.
First was a waterproof bag. I didn't get much water in the canoe (except when I tried the kayak paddles) but there was enough that the plastic grocery bag I had was pretty much useless. The waterproof bag should keep me from worrying about that in the future.
I also grabbed a gorilla-pod for my camera. I took my old point-and-shoot with me and there was enough water in the canoe that sitting it on the bottom wasn't a really good idea. Also I think it would be cool to be able to get some shots of me actually in the canoe, and with the gorilla-pod I should be able to mount the camera to just about anything. I plan on leaving it wrapped around one of the thwarts, still in easy reach.
I really want to get some proper roof-racks now, since putting the canoe on and off the car is by far the most tedious part at the moment. I think i'll also pick up a removable yoke so that I can carry it a little easier, hauling it over the shoulder isn't all that comfortable even over the short distance I had to carry it from the car. Especially over uneven ground.
Also, I found out that CardioTrainer, which I used to record the trip, doesn't record times. Looks like I'll have to grab a different program for tracking my progress... Too bad, I like CardioTrainer.
Posted by Unknown at 7:36 PM No comments:

After much deliberation, and years of dreaming of owning a canoe, I finally manned up and got one.

I spent basically the entire weekend doing research about which one to buy, and finally I settled on the Old Town Pack. Some criteria:
The smallness was the biggest factor, since in order to get it into the apartment I needed to fit it through a window. After much measuring, I decided that the pack should, in fact, fit.

After work today, I hurried over to The Boat House (a local watersport store) and asked about the Pack. I had found out the day before that they actually had one in stock, so I was excited to see it.

After talking for a few minutes, the owner indicated that they had a Pack available for rental as well, and that if I liked I could rent it and try it. If I liked it, the cost of the rental would come out of the price of the canoe (I was surprised to find it was only $15 to rent the canoe, for some reason I thought it would be more).

I rushed to the car and grabbed my paddle and PFD, and next thing I knew I was paddling up the Mowhawk river in a Pack. It was pretty windy, and I had a little trouble making very good speed against the wind and current combined, but it was fun as hell.

After my little paddle, I happily went back to the store and put my monies down on the boat. Unfortunetly, by the time it was all said and done I didn't have time to actually try my new canoe. But now came the real test, would it fit into the apartment?

After arriving back at my place, canoe strapped securely to the roof of my car, and after much measuring, I gave it a shot. Worked like a charm! Of course, now I have to re-organize my living room...

There are lots of times when I'm playing the ukulele and I forget how to do a particular chord, or it's a chord I've never seen before. There's also lots of times I just want to show someone else the fingering for a chord that I do know, and after lots of acrobatics to make it easier to see, I normally revert to drawing it on a piece of paper.
No longer!
I give you Chordophone - an application for Android that will show chord fingerings. It's extremely simple, just pick a chord from the list and it is displayed on a fretboard on the left. 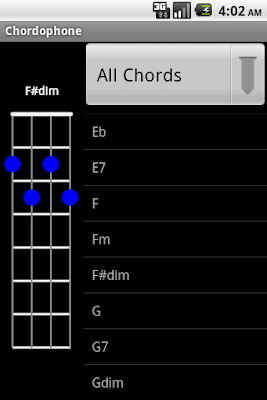 All the source code is available here: http://code.google.com/p/chordophone/
The project also served as an experiment in how to get an application available on the marketplace. So grab your camera and scan this to go right to the download page: 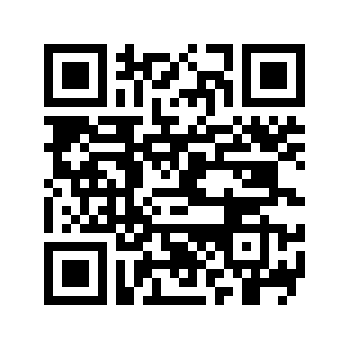