I like taking pictures. I also like maps. Combine those two things and my love of all things geeky, and you have Geotagging. 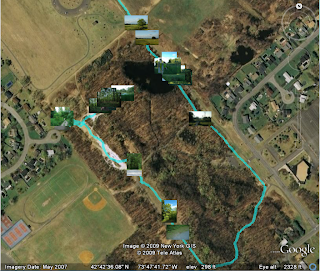 I got a new (to me) camera from a friend of mine at work. Its a Nikon D70 and it came with a lens and some random accessories (Memory card, extra battery, etc) for $400. I got it from him on monday, and I've been playing with it the last two evenings.
Tonight, after going and buying a nice backpack-style case (the holster case I had was too small to hold the camera and any accessories) I decided to take a talk at the crossings (which is also the place I go to fly my plane) and take some pictures. Then, to add to the fun, I decided to try and get some sweet Geotagging going.
So I started up 'My Tracks' (A GPS logging app written by Google that can export to GPX) on my Android cellphone (which is GPS equipped) and set off to take some pictures.
After a while of walking around I managed to get some pictures (lambroghini!) and since it was getting dark I decided to go home and try to geotag them. Easy right?
I grabbed GPicSync after a bit of internet searching and set to work. Of course, things never work the first try, and I got a 'missing DLL' error when trying to start the program (why can't Open-Source people ever install apps on windows correctly?). After grabbing the DLL from the internets and cramming it into the install directory, it seems to start correctly.
After taking turns using my Mini-USB jack to copy the pictures from the camera and the GPX file from the phone, I was ready to set off...
Of course, nothing goes right the first time. The program was unable to synchonize any of the times, and so it just made copies of the originals. Yeay... So I look at the GPX file in notepad, looks like all the times are in UTC GMT (I'm pretty sure the pictures weren't taken at 11:59 pm), so I've got to set the UTC different right. I think I'm at -5h from GMT, so that should do me. (WHY can't the program check what Timezone you are in? Seems easy enough)..
So it seems to do something, and I start to get hopefull. Time to download google earth and try out that 'View in Google Earth' button staring me in the face... Looks like all the pictures are a bit off, but close.
So it seems the problem is two-fold. I'm not at -5h from GMT, I'm at -6. Good thing the camera is set to be an hour fast. So its no big deal. The problem is that the camera is also 5m and 52s off, which is enough to put the pictures in all the wrong places.
So I grab a program (after more searching) that lets me edit the EXIF timestamps for the pictures in one fell swoop (its a command-line program called jHead) and after a quick:

I'm back to GPicSync to test it again (with the correct -4h in the UTC Offset field this time)... SUCCESS! The pics all line up in Google Earth and everything is awesome looking.
Next time it'll be much easier (I Hope).
You can see the the path I took here. I'll post the photos on my Flickr account and they should be all geotagged up if you're interested.
View Picture Test in a larger map
Update: I found what looks like a MUCH nicer program called 'GeoSetter' (its also freeware): http://www.geosetter.de/en/index.html
It has all kinds of time-fixing-previewing-altitude-setting goodness right in the same package. Much more user-friendly and sensible than the GPicSync program I originally used.
Posted by Unknown at 8:31 PM